Twitter Bootstrap Content Area package hasn't been updated for a while which might mean either no one is using it or it's mature enough that does not require new features :)

Not sure if anyone still use it or should I upgrade to any other CSS framework out there..?! Package is going strong with more than 18k downloads for the last version.

Anyhow, I finally got time to sit down and scan through some of the tickets reported for the package that has been hanging around for a while.

Interestingly, bug reports were quite odd cases (assuming that Bootstrap renderer is installed and configured properly). Like BlockIndex returns always -1 (report here).
Also modification of the start element (comes quite handy when you need to anchor content area items with some bookmark and later link to it) of the content area item was not working.

As it turned out, Bootstrap Content Area renderer was not properly registered in IoC container and therefore did not have a chance to plug in and add its own behavior to the rendering pipeline.

This is not going to replace ContentAreaRenderer in the container. Nor does this code (I'm not sure why tho):

The only way (at least for now) I found -> is to intercept renderer, "silence" it by ignoring given instance and just carry out custom Bootstrap content area renderer logic:

Another interesting issue was that provided way to modify block start element was working as documented. I would not expect much from the library if one is developed and tested during night shifts :)

Idea for the feature is that you are able to override renderer (by inheriting from built-in) and add your own custom logic how block start element is processed. This was nice feature back in days when we had to generate site menu out of content area blocks - meaning that each block start element should have anchor attribute so that menu items could properly link to page bookmarks. Feature was not working in latest version.

At the end it turned out that again improper IoC registration was done. While registering ContentAreaRenderer in container we have to make sure that we check who is sitting there and respect if renderer is somebody from BootstrapAwareContentAreaRenderer object family :)

So this is final code for the renderer registration:

Sometimes you would like to set display option that does nothing - none of the CSS classes would be added that could mess up your site design. This was actually requested by somebody who has JasonRodman identity at GitHub.

For this reason there is a new built-in display option - None.

You can add it to the supported DisplayOptions:

If you set this display option on the block (in this example "Teaser Block" in Alloy sample site) only following classes will be added to the block container element: 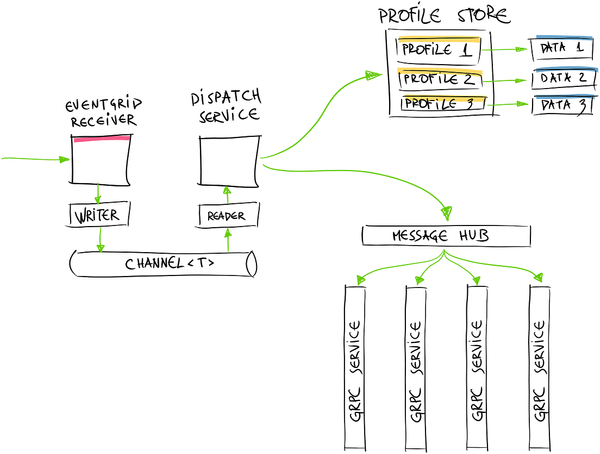 We finished previous post with data processing pipelines and projecting data into profiles in order to reduce unnecessary data processing for every connected client to the application.

This is next post in series about real-time public transport tracking system development based on Azure infrastructure and services. This time we talk about data broadcast using gRPC and SignalR.