Time comes when you need to extent EPiServer functionality by providing your own library with new or modified functionality.
I'm big fan of configuration via code. Which may give you possibility to configure some features with LambdaExpression, e.g. () => true to ensure that you are able to set feature's state on or off during runtime. This opens up quite interesting scenarios that I'm going to cover soon enough in other blog post.

Anyway, what I'm looking for is to make sure that my library consumers can do something like this:

From the "end-user" perspective everything seems quite logic -> following best practices for EPiServer development - startup initialization is moved to InitializableModule.

Regardless that "end-user" code (MyLibInit.cs) seems OK, this makes it a bit challenging to set everything up correctly on library's side. The issue here is with order of calls for InitializableModule initialization code. Following best practices for EPiServer development also on library's side - we would need to setup our library via InitializableModule as well (LibInit.cs).

This is not guaranteed in EPiServer - which means that sometimes your "end-user" module may be called before library's init module - this is perfect timing of the modules - library's module can now read configuration values setup by library consumer code:

However, sometimes EPiServer may call library init module before "end-user" module - which means that configuration settings will have no effect (as they are set after library is initialized):

One thought that I gave chance to prove itself was to create intermediate fake dependency module - that library "end-user" module could depend upon and then create another module internally that would also be dependent on this fake module. And then add "actual" initialization module (LibInit.cs) as dependent module for this fake module. Visually it may look something like this:

However, in this case (and I haven't dig into more details) case was so that EPiServer made sure that LibInit is called before MyLibInit. I'm speculating here that EPiServer makes sure that "longest" dependency chain gets called first.

Actually solution for this case of dependency juggling is really simple. Fortunately EPiServer exposes few events that you can hook onto and add your logic after all of the modules have done their job: 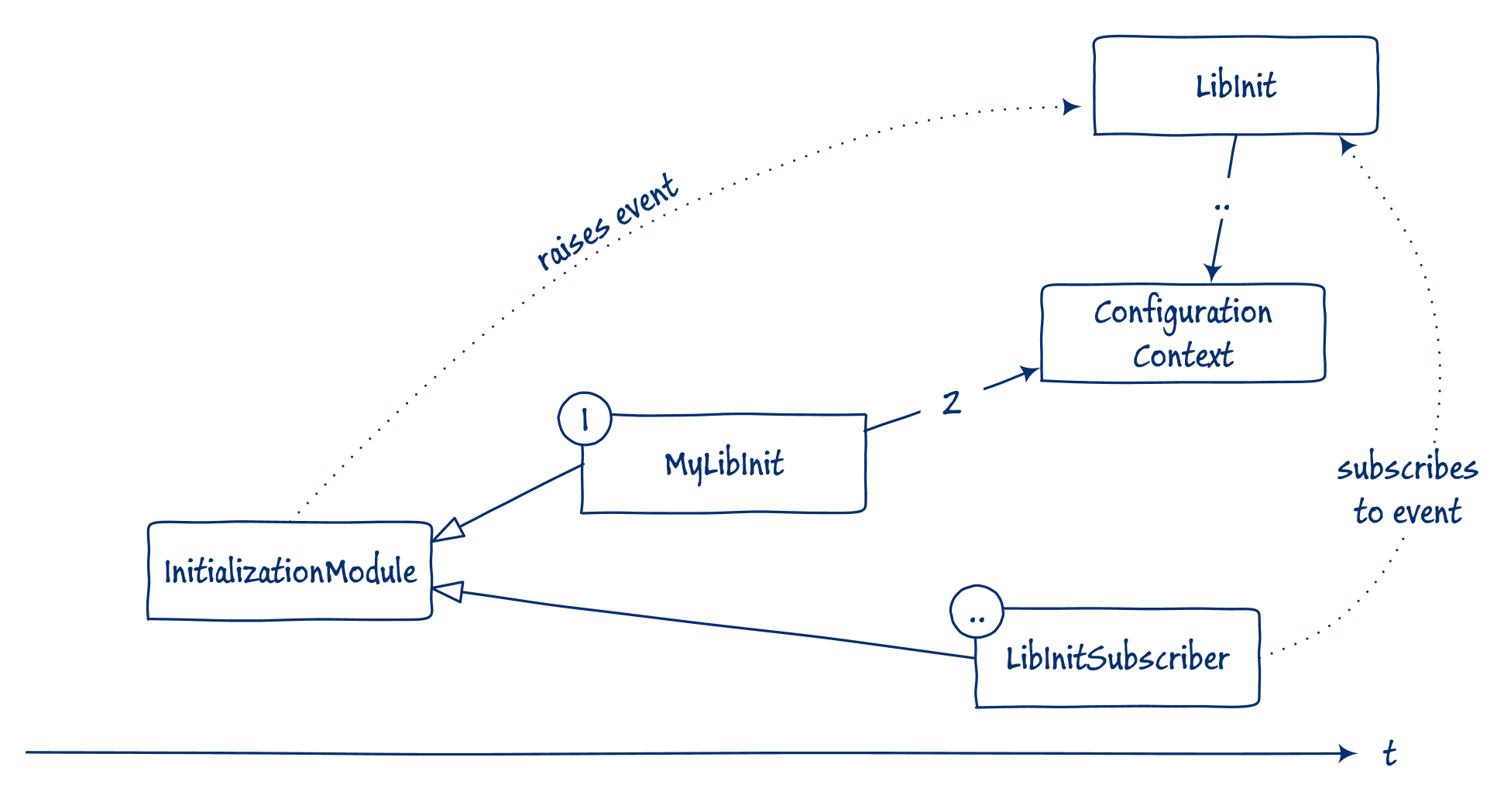 Using event subscription - it's guaranteed that your event handler will be called after all modules have done their job - including one that setup your configuration context.

In code it looks really simple:

Solution seems to be simple enough to configure your own library behavior based on what "end-user" has configured.

Sometimes you may need to swap out some stuff from IoC container and replace with your own stuff (for instance, if "end-user" is willing to do so and had configured your library with that setting).

IContainer is not accessible in InitializableModule interface. But EPiServer gives access to dependency container while executing collection of IConfigurableModule.

Which means that we just need to refactor our module to implement IConfigurableModule and then capture instance of IContainer and inject things we need later on:

Subscription to the InitComplete event makes it possible to do things in your library after your consumers have configured stuff via their initializable modules.

Background Why on the Earth I would ever want to change my EPiServer localization system? EPiServer provides you with a way to organize localization resources using set of Xml files. Working on multi-lingual projects and seeing how support teams are struggling and bored with

For some powerful sites and editors sometimes it's wise to give them power to manipulate some stuff in <head> area. One of the simplest way to give editors this possibility is to create ContentArea where editors could create particular set of available